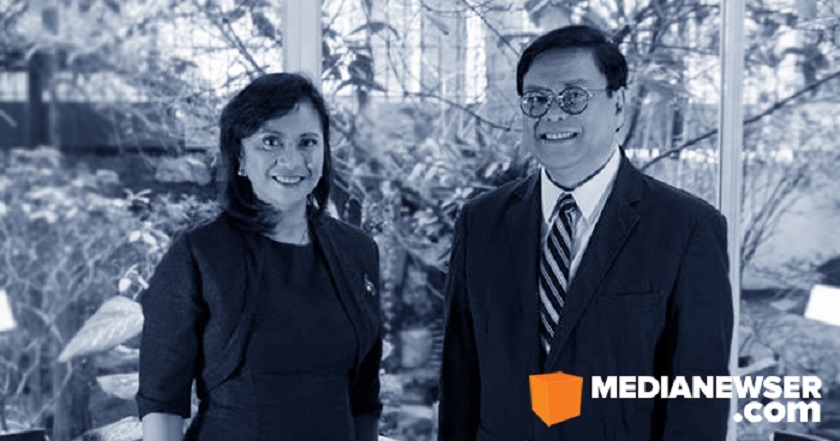 On the most recent edition of his webshow Interview with Dean Mel Sta. Maria, lawyer and broadcaster Mel Sta. Maria sat down with the country’s second highest ranking official — no other than Vice President Leni Robredo — for a wide-ranging interview.

It was his biggest coup since transitioning from television to web — an effort on his part to utilize more of his interviewing skills, first seen during his game-changing interview with then-President Noynoy Aquino in 2014.

When Sta. Maria snagged that exclusive interview with the country’s then-commander-in-chief, the country paid attention. Viewers and critics — including this very website you are reading right now — lauded him for his gritty and no-nonsense style, which brought us back to the days when broadcasters really know what questions to ask.

Many thought back then that the bosses at the Kapatid Network would capitalize on the buzz it had created, but in practice, they just didn’t know how to market their talents.

“After I interviewed the President Aquino in August of 2014, wala nang assignment na naibigay sa akin. Probably they (TV5 bosses) didn’t really recognize me to do certain things like that. But I know I can do it,” Sta. Maria shared to us in a recent interview.

Since leaving his post as resident legal analyst of TV5, Sta. Maria has fully embraced the web, creating his regular video commentaries on Facebook and on his YouTube channel. He has also consistently practiced his broadcasting and interviewing skills with his one-on-one interviews with some of the country’s leading politicians: Senator Bam Aquino, Representatives Gary Alejano and Neri Colmenares, and former Chief Justice Maria Lourdes Sereno, just to name a few.

Heading into the 2019 midterms elections, Sta. Maria said he and his team are not only planning to do more installments of his newsmaking interviews, but they are also looking into expanding the program’s segments. Their plan is to feature ordinary Filipinos who will have a say on May 13th (election day).

Right after his interview with VP Robredo, Media Newser Philippines sat down with Sta. Maria to talk about his webshow and its role in the upcoming 2019 elections. An edited transcript of our conversation appears below.

Media Newser Philippines: Hi, Atty. Mel. Just a few questions. First, why did you make the jump from TV to web?
Atty. Mel Sta. Maria: After I interviewed the President Aquino in August of 2014, wala nang assignment na naibigay sa akin ang TV5. Probably they didn’t really recognize me to do certain things like that. But I know I can do it. So nung nakalaunan, I said, “Why should I not set up a YouTube channel?” Because nakikita ko na nga, nag-uumpisa na ‘yung YouTube Revolution. ‘Yung ating mga millennial, wala na silang TV habit. Neither do they have a broadsheet or newspaper habit. Pupunta na lang sila sa tablet nila, sa cellphone nila. Kung mapasadahan ka nila, it can catch their curiosity. It’s a social medium that is already revolutionizing media platform.

I am on my own. I am not backed up by a big network. It’s just me. It’s just a simple little group. But you know, I now believe kasi na with this YouTube Revolution, you could be your own social media mogul.

MNP: Ano po ang advocacy ng YouTube channel niyo?
Atty. Mel: What’s the advocacy of this YouTube channel? We want to change the world. Grand ambition, but it keeps us going. Kaya nga I do not anymore go on that kind of situation na I will tell them the pros and cons because at this time of our history, more or less alam na natin ‘yung masama at mabuti.

MNP: We would watch that interview!
Atty. Mel: What is a very good interview? It’s between the president and his critic, diba? It’s giving the president the opportunity to explain himself. You know you don’t have to debate in an interview. It’s just that questioning the president, his platform, and you know trying to be the devil’s advocate at times but knowing you are to stop. I hope I could interview the president and there are many more people who wants to be interviewed by me. Nagpapahiwatig sila so let’s see.

“I am on my own. I am not backed up by a big network. It’s just me. It’s just a simple little group. But you know, I now believe kasi na with this YouTube Revolution, you could be your own social media mogul.”

MNP: But, Atty. Mel, since you know a lot — naisusulat niyo ito sa column niyo, nagagawan niyo ng commentary sa Facebook and webshow niyo — the president might have a hard time dodging your questions.
Atty. Mel: Yes. And here’s my first question: Do you feel accountable for what is happening all over the country? Isang tanong lang muna then it will proceed from there. It’s a wild dream. Probably it will happen, probably it will not.

MNP: Coming into the 2019 midterms elections, Atty., what do you think will be the purpose of your webshow Interview with Dean Mel Sta. Maria?
Atty. Mel: Well, it will be multifaceted. That is my hope. We will interview candidates and we will interview ordinary people so we will know what they think. Para ‘yung mga ordinary people, “Oh ano ang tingin mo kay mo ganyang kandidato?” We will let them talk. That will be our next project.

MNP: How do you gauge the success of your interviews?
Atty. Mel: Ako, first of all, I always look for the opportunity. If I can get myself out, if I can get my interview out — that’s the first objective. Like my interview with the vice president. I want to have this initial thing, and then let’s see how it will roll. My staff will just share it and consistently put it online and let’s see how many people will look at it.

For example, noong ininterview ko si Florin Hilbay — that’s why I know malakas ang dating ni Florin Hilbay e — after one week noong natapos kami, we already reached 70,000 views. So it’s really a revolutionary medium talaga e. You cannot rely on “titignan ko muna ito, marami ba yang engagement?” Sometimes maganda ‘yun. It can help, but it is not the sole determinator because how your content will interest people will create the views. And we see that all the time.

MNP: May following na kayo at ‘yung webshow niyo. Sabihin natin may network na lumapit sa inyo at sabihin, “Mel, maybe we can do this on television?”
Atty. Mel: I will welcome it. You know, if you feel, for example, fitted into something — which is good naman, I have no regrets — if you could expand yourself some more and people will give you that opportunity, I will welcome it. No problem with me, I mean I’m my own man. I will tell them, I will decide for myself if I think it’s good for me and it’s good for people I want to advocate for.

MNP: To those who are new to your webshow, how and where they can catch it?
Atty. Mel: I’d like to invite my readers, people who watch me on TV or listen to my radio show, to go to my YouTube channel. ‘Yung show ko, normally we go on air 4:30PM every Sunday. And makikita niyo rin ‘yan sa Facebook page ko, just type in Mel Sta. Maria.