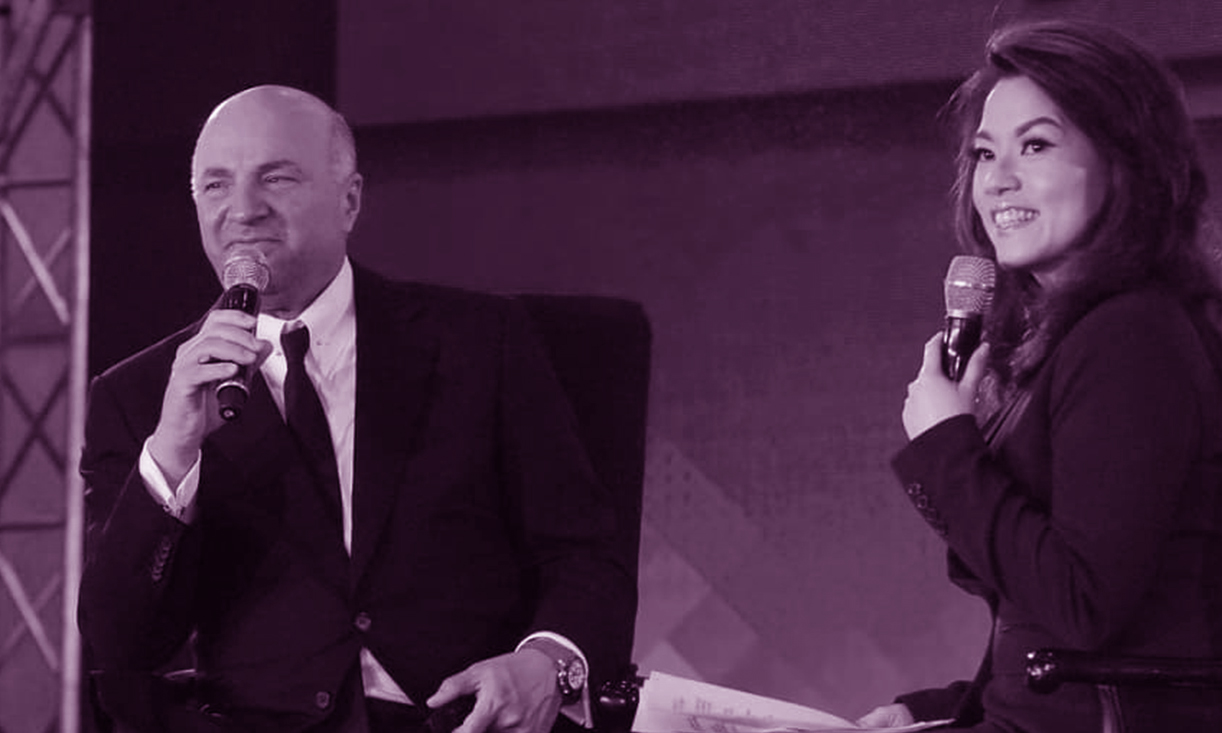 At 2:07 on a recent Monday afternoon, the Grand Plaza Ballroom of Sofitel Philippine Plaza Manila in Pasay City was packed with a huge crowd of people, each waiting for the arrival of entrepreneur and venture capitalist Kevin O’Leary, who was the featured speaker that day at the 4th ANC Leadership Series Forum.

On one side of the stage was ABS-CBN News chief Ging Reyes, who was whipping through her introductory speech. On the other were network staffers and some familiar faces in the industry. Hovering around them was a lady in an anchorwoman suit, who was about to kick off the program: ANC anchor and managing editor Cathy Yang, who was the forum’s moderator.

Yang had spent the last few months preparing for the big event — which was her second, following the forum’s hugely successful inaugural edition in 2016 — going through what she described as a “cranial” and “visual” research. From reading O’Leary’s self-penned books, Yang also binge watched past episodes of Shark Tank, where he serves as one of the key investors on the show, and some of his previous appearances in American talk shows. Her goal was to know “how various interviews of him were made.”

During this period, she was also busy moderating various fora locally and regionally — including one in Tokyo and another in Hong Kong — and preparing for her Wharton Business Seminars.

“The books arrived just before I flew to Tokyo to host and moderate an immersion on cryptocurrency. During the flight, I started reading one of his books, and I chose the one he wrote last, which is the Cold Hard Truth on Family, Kids and Money. I wanted to know him first from the lens of a family man and family life. I hadn’t gone through a third of it and I was hooked,” Yang said.

To get a sense of how he is behind the camera, Yang also tried to know more about his passion: wine-making. A self-described “fine wine geek” herself, who is now in WSET Level 2 — a course in the field of wine and spirits — Yang attempted to get a hold of O’Leary’s wine bottles, checking out all the outlets in Manila and Hong Kong, only to find out that they are only being sold in the U.S.

Shortly after her shoot for her O’Leary The Boss episode, which is slated to air soon on ANC, Media Newser Philippines met up with the award-winning journalist for a quick chat about her experience moderating another ANC forum. An edited transcript of our conversation appears below.

Media Newser Philippines: Hello, Cathy. Congratulations again. First, we want to know about the preparation process. You were busy hosting and moderating various fora these past months. How did you find time to also prepare for this?
Cathy Yang: I prepared for it from the middle of this year because I was told that I would be moderating the next ANC Leadership Series. And during that time I was getting exceptionally busy with my schedule — juggling my daily shows with my weekly Boss shoots, and going regional with my hosting and moderating sessions. I tried searching for Kevin’s books in our local bookstores and they were all out of stock. So I ordered them up on Amazon. Fortunately, the books arrived just before I flew to Tokyo to host and moderate an immersion on cryptocurrency. During the flight, I started reading one of his books, and I chose the one he wrote last, which is the Cold Hard Truth on Family, Kids and Money. I wanted to know him first from the lens of a family man and family life. I hadn’t gone through a third of it and I was hooked.

For the first time I learn a different reason why couples should stay married. I mean, you know you live in a country like the Philippines, it’s Catholic. Everyone, you know, tells you, “You got to live up to it. There is no divorce in this country.” But here’s someone who believes the same — that you ought to stay married — but not because the church says so, or because of love, but because it’s financially smarter. So the end goal is similar except that the motivation is different. That was quite rad, I thought, but hey, totally practical.

I’m a wife, mom, and a parent. So reading the family book was the right decision I thought because I got to relate with him on a personal level, know him more as dad and father, before I got to know more about his entrepreneurial, investing journey. It was so enriching because towards the end of my own journey getting to know him through the pages of his books and before he arrived in Manila, I also had the opportunity to discover and appreciate his love for wines. I am a wine geek, a WSET Level 2 certificate holder. I said, oh, we have a lot in common. So I sought his wines in Manila and Hong Kong, only to find out they were sold only in the U.S. Fortunately, my travels then were taking me to Philadelphia, over 16,000 miles of a round trip, where I took on my business journalism scholarship at Wharton. So I got to order his wines online from his website while I was in Philly. He was so shocked to know.

MNP: And you ordered them just for this?
CY: I did. I appreciate wines too and I wanted to go that extra mile of deepening our conversations on-stage and on The Boss, with a pivot on the vine. I took home two bottles: a 2017 Californian pinot noir and 2017 Californian Rosé. I said, “If these survive customs and bottle shock then we’re meant to drink them.” And I did not open the bottle of pinot noir until my Boss chat. So it was fresh, out of the bottle and we tasted such a good pinot noir.

So the research wasn’t only cranial and gustatory, it was also visual ’cause I also watched Shark Tank in and out, and how various interviews of him were made, like with one of my favorite anchors Megyn Kelly before the trouble started. So the visual research went the full range just as well. The biggest delight to me, and this is what I appreciate most in preparing for interviews, is you can only know so much about the person through research. It’s that that last mile when you talk to that person that you really get to know him or her, through that gem of information pouncing out either as breaking news or as a precious aha moment. In this case, it was love for collecting luxury watches. We went on and on talking about it as a fashion piece and asset class, and it was so enriching because I’ve always wanted to know a lot more about luxury watches, and it all came together when he let on his biggest hobby-turned-investment. 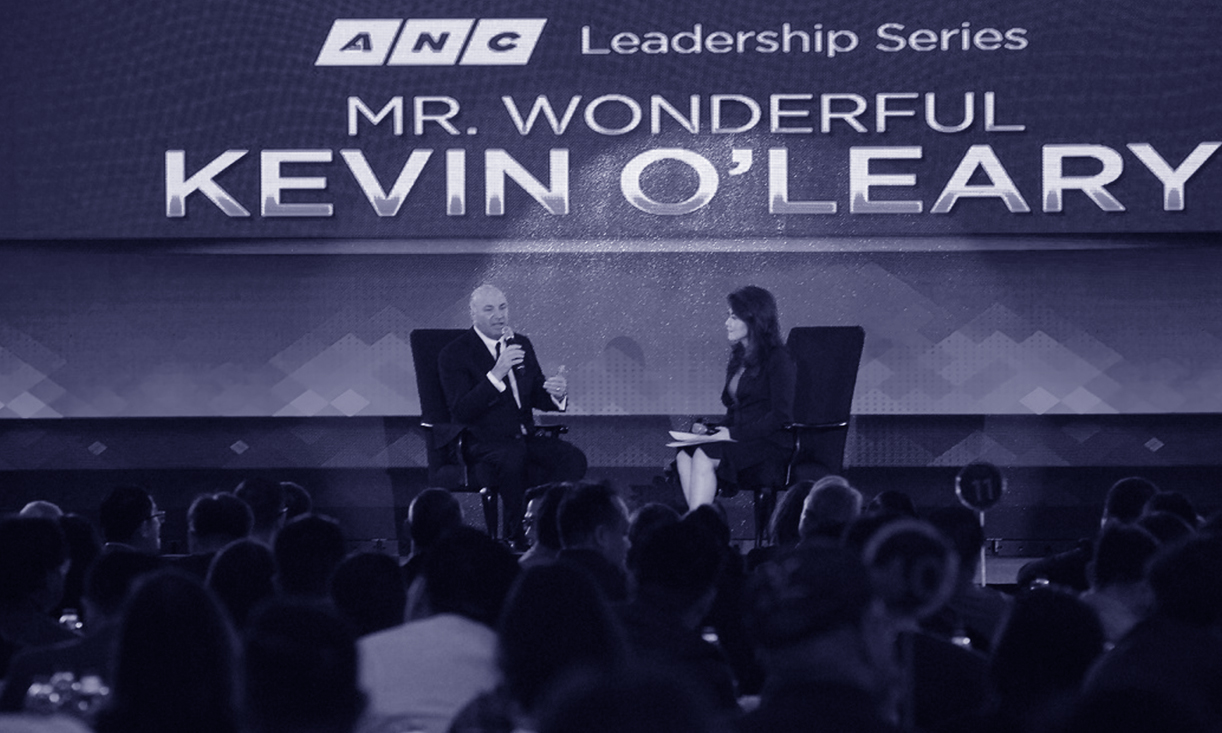 MNP: Yes, on stage.
CY: Yes, and also off stage, actually. I asked him, “May I ask you about that red strap on your wrist because it’s the first thing I notice about you when you would appear on Shark Tank. You would be that man in the middle with the black suit. And then suddenly a red strap of a watch.” So I took an interest and I said “I can’t not ask you about that red strap.” And with it carried a rich story of why he chose red, why he had a red Montblanc pen that went along with his red-cased mobile phone.

MNP: Reading his books, watching his previous interviews, did your impression of him change after meeting him in person and getting a chance to interview him?
CY: I prayed a lot that he wouldn’t be caustic, that he wouldn’t be so brash. He does that in some Shark Tank episodes or media interviews. So I prepared myself for that. And it’s fine, his personality unfolding, but as we’re in a culture where everyone’s a little more conservative, I prepared myself on how to manage it. Turns out, I didn’t need to. I just let the conversation roll and flow.

I believe that this was one session where people really just wanted to ask Kevin so many questions. There was just a lot of energy in the audience, of them yearning to ask and hear from him, and I am so glad that Kevin had agreed the night before to go on for longer should there be more questions in the audience, adding he wanted to make sure he made the most out of his visit here, traveling all of 22 hours from Miami to Manila. Our Boss chat also went on for much longer than the usual 25 minutes, and I am thankful for the generosity of time, as we were able to cover a lot more topics in detail that we didn’t talk about on stage during the forum.

We did break news during The Boss chat. My digital team tweeted every single headline that came out of that 40-minute interview. We were like a well-oiled organized crime operation if you will. [Laughs] And on the hour that I did the forum, the digital team had already produced a Boss piece online, well before anyone else could tweet or IG on social media. I totally appreciate the teamwork that came together in this event, the enormity of the opportunity that I had to actually prepare for it, and the inputs that the team gave for me to ask equally good questions.

MNP: You’ve done interviewing Branson and now O’Leary. Who’s next?
CY: Anybody who wants to come to Manila — I’m all for it!

MNP: But do you have a specific person in mind?
CY: I’ve always thought that Elon Musk (CEO of Tesla) would be very interesting because I followed him from the perspective of a journalist and he rated highly, or most controversially, during my Wharton Business Seminars. Somehow each of the professors that I had who spoke in front had something to say about him and it was so compelling from a strategic, leadership point of view and from his organizational and operational — everything. And then came the news about of a change in leadership again when I came to Manila and I think that it’s that kind of company that I’d want to talk with — something so innovative that maybe tomorrow that news is gone and another set of news is coming forward and you just got to catch where that flow is going.

I’d be interested to talk to innovators at this point. But I am open. I’ve done the depths and breadths of beyond business. I’m open to speaking with thought leaders. I had this at Bloomberg. Every single day I had a thought leader. It’s just like bread and butter, it’s like breathing air. But here [in Manila], it’s so special because when they come here, they must have a bigger reason. And the bigger reason I got from Kevin today is that he had optimism. He’s not ready to invest but he has seen the property prices are stable. He finds it expensive. I appreciate the honesty and clarity.

I came away from this event with a little more confidence than the last on how to conduct events like these with a huge, live audience. Each is always different. I think my exposure to and learnings from different fora — moderating fora, hosting fora — have all shown up here for some reason. And it’s all added value to my core strengths as a journalist – giving me more depth and nuanced confidence in my anchoring and reporting combined.