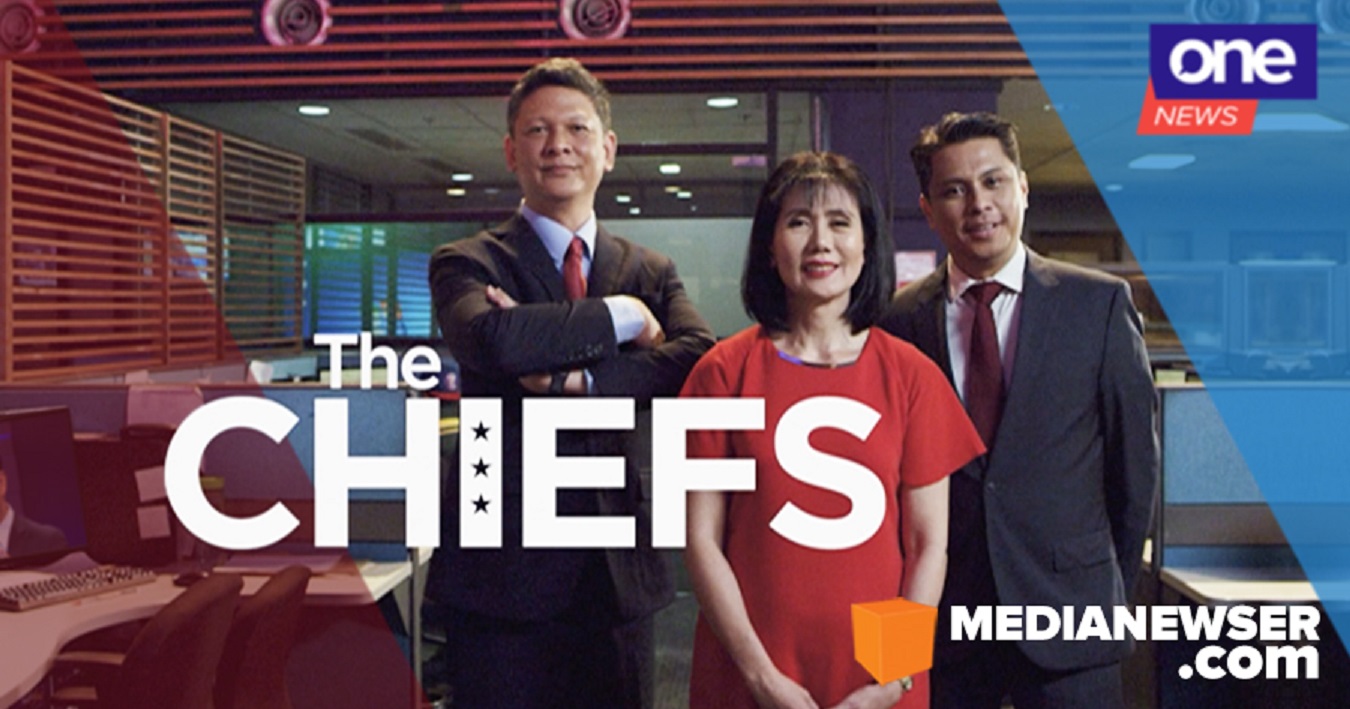 Exactly three months since its initial launch, you may be wondering how One News is doing in the news business. More importantly, you may be asking, what does the Cignal news channel has to offer that can convince you to subscribe to Cignal TV, or switch from SkyCable to Cignal?

One of its programs may be the answer to both of these questions: The Chiefs, the one-hour nightly talk program hosted by Ed Lingao, Roby Alampay and Ana Marie “Amy” Pamintuan.

The Chiefs is no different from other talk programs on TV today. Its format actually resembles ANC’s Headstart, CNN Philippines’ The Source and GMA News TV’s Bawal Ang Pasaway Kay Mareng Winnie. But what makes it revolutionary, not to mention ambitious, is that it puts together all the heads of the MVP media properties in one table — a concept that we only or usually see during major news events.

Also on the plus side, The Chiefs occupies the primetime slot, airing right after One News’ flagship newscast The Big Story — signaling its importance to the channel and the MVP group.

Now this is a brilliant move. A regular primetime talk program hasn’t been done since Q11’s Tonight with Arnold Clavio in 2010. (Of course we are talking about a different program here as TWAC back then was news oriented.) By airing regularly on a nightly basis, The Chiefs can not only chase the headlines, but also set the news agenda for the following day.

The initial result proved this point when its interview with ousted Chief Justice Maria Lourdes Sereno made the news shortly after its airing. In it, Sereno revealed that the Duterte administration continues to persecute her, with the Bureau of Internal Review (BIR) launching an “illegal” investigation against her.

Also in July, the program scored one of its biggest interviews to date when it had Julio Teehankee, the chairman of the Consultative Committee’s sub-committee on political reforms. During an exchange with the hosts, Teehankee revealed something that would change the course of the charter change campaign: that President Rodrigo Duterte can run again under the proposed federal form of government.

He has since clarified that he “misspoke” in the interview, but the damage to the campaign was already done as constitutionalists and ordinary citizens began to question whether this is really being proposed for the good of the people, or the good of the president and his agenda.

Another episode that drew headlines was the program’s interview with NEDA Secretary Ernesto Pernia. It happened just days before President Duterte’s third State of the Nation Address (SONA), so as expected, the subject of federalism would be brought to the discussion. Pernia, surprisingly, sounded the alarm on its possible effects on the country’s economy, saying that a shift to it will “wreak havoc.”

“It’s unlikely that the regions will be ready. Our concern, my concern, is that we are moving to connect the regions, to bring the lagging regions into the mainstream economy. That momentum of infrastructure improvement in the regions is going to be disrupted,” Pernia said.

The exclusive interview would later become front page news — at it should be given that it was a clear deviation from the administration’s official line — and it would also be picked up by various news outlets including ABS-CBN, Rappler and Philippine Daily Inquirer. Talk about making the news!

Chief Presidential Adviser Salvador “Sal” Panelo also didn’t leave unchallenged when the program had him in June to talk about the administration’s crackdown on idlers or tambays, among many other things. As what we have seen in his previous television interviews, Panelo is not someone to be taken with kid gloves. The man is skillful enough to answer even the toughest of questions. He has also mastered the art of political spinning, reason why interviewers like Karen Davila and Winnie Monsod had to be extra challenging in order to disallow him from twisting facts (see Davila’s interview with him last year).

“You know, crimes arise from those situations and I think the president is precisely doing his work as a father of the nation, with respect to the manners of a parent. He’s just doing his job,” Panelo said when asked about the anti-loitering drive.

“But, Sir, isn’t that a dangerous proposition that this is the root of all crimes, the tambays who loiter around?” asked Lingao.

Alampay then went on and gave a pretty good argument: “It (the campaign) may even be the popular sentiment, but when we talk about rights — civil rights, political rights, human rights — aren’t we talking about numbers and majority sentiment, rather we are precisely talking about the possibility that there will be one policeman who does not understand [the campaign], and acts purely on the say so of having heard this from the president on television and goes out and interpreted it that way?”

“This president is a lawyer and very, very serious about obedience to the law,” Panelo answered, to which Pamintuan wittingly responded, “Well, the president also said recently na ‘Napakagagago naman ng mga ito.’ His order was to accost, not to arrest,” referring to Duterte’s statement that he ordered the police to only accost and not arrest tambays.

To be clear, not all of the already-aired episodes were must-see TV. There were few uninteresting guests along the way and discussions that would’ve turned out to be more fascinating had the hosts asked more follow-up questions.

Case in point: Senator JV Ejercito’s assertion that the killings of two town mayors in July were probably orchestrated to destabilize the Duterte administration should’ve been challenged. Perhaps a good question is why did the good senator buy the Duterte propagandists’ playbook hook, line and sinker? Just imagine how it would’ve made the news the following day.

Nitpicking aside, the production team deserves to be commended for always coming up with topics that Filipino viewers should know, like federalism, which to our estimate already totaled to 7 episodes, or the state of Philippine education. There were also long-form discussions on the peace talk, the healthcare system in the country, and same sex marriage, just to name a few.

Other noteworthy episodes that really showcased the strength of the program and its hosts were the roundtable discussion on the VP electoral protest with Atty. Romulo Macalintal and Atty. Glenn Chong as featured guests, the live post-SONA broadcast, which featured multiple guests like Atty. Mel Sta. Maria and Atty. Bruce Rivera, and the exit interview with now-former Ombudsman Conchita Carpio-Morales.

Ultimately, it’s not difficult to root for One News. The news channel sure has a noble intention and we could see that not only in The Chiefs, but also in other programs like Agenda and Convo.

It also has a team of solid journalists and broadcasters — albeit minuscule when compared to ANC — who have earned our respect over years. Aside from the trio of Lingao, Alampay and Pamintuan, there’s also Cheche Lazaro, Tony Abad and Cito Beltran, as well as new promising talents like Danie Laurel, JP Ong and Bim Santos. Behind the scenes, there’s also Jove Francisco as showrunner of The Chiefs — an assurance that viewers will get quality journalism and storytelling above anything else.

As what a cable news veteran once said, “Good journalism, good television, can make our world a better place.” Here’s hoping that One News will be that force for good.